At the end of each Doug Bruno Girls Basketball Camp session we give away four very special memorial awards. Below you will find an explanation of each award and why it is so important to honor these women. 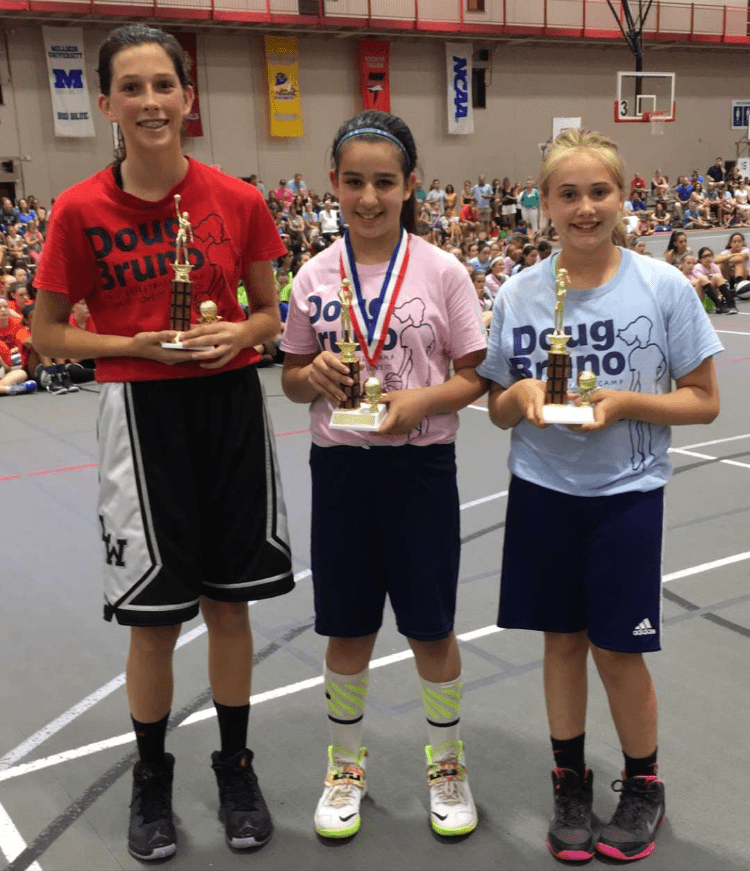 Chris Gavin was a promising student-athlete from Valparaiso HS in Valparaiso, IN who attended Doug Bruno Camp in the early 1980’s Chris was an excellent athlete with good fundamental basketball skills. With her work ethic and talent, she was sure to attract the attention of college recruiters as a Division I scholarship student-athlete.

Chris was the All-American girl, she was successful in everything she did: she excelled at every sport, was an outstanding student and had lots of friends. She respected her parents, teachers and coaches, and she was a great teammate.

It was the fall of Chris’ sophomore year in high school. Chris was projected to be the starting point guard for her high school team that was ranked as one of the best teams in the entire state of Indiana! Chris had just turned 16 and her parents promised her a car once she had gotten her license. In addition to loving basketball, Chris had a lot of friends, and enjoyed inviting them over to her house to go swimming.

Unfortunately, Chris never had the chance to drive that car. It was a beautiful fall night and Chris was out with friends at a party. Chris always did as she was told. She didn’t engage in the kind of negative behaviors that a lot of kids do. It was getting close to the curfew time. Chris panicked because she thought she would be late. She made the quick decision of getting into a car with some kids who had been drinking thinking she was doing the right thing by getting home on time; it was a decision that cost Chris her life. That car never made it home and Chris’ brilliant future was tragically cut short.

We remember Chris and her legacy to remind everyone to always make smart decisions-even if that means you get home a little late. Do the right thing and never get in the car with someone who has been drinking-that is what Chris Gavin would tell you today if she could. 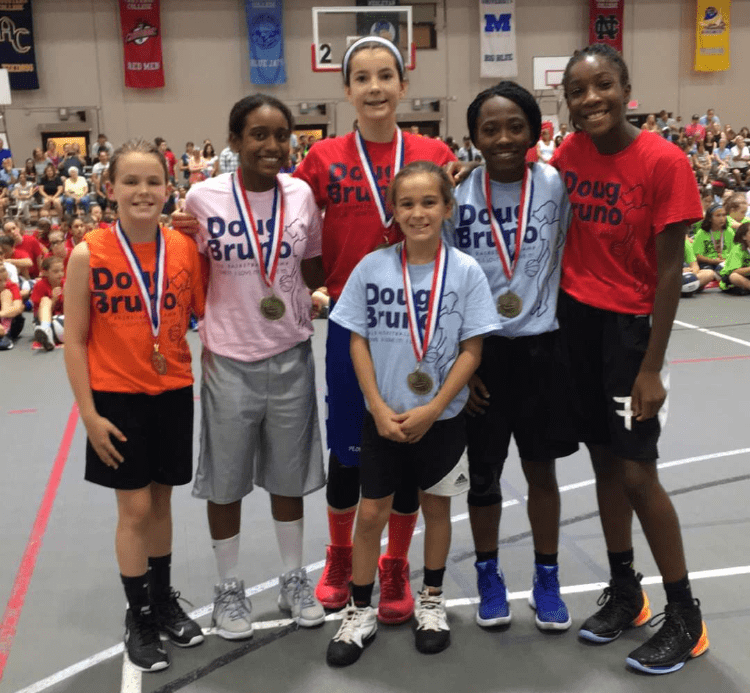 Maggie grew up in North Hollywood, CA and graduated from the University of San Diego in 1999. After a disappointing tryout with the Los Angeles Sparks, Maggie decided she wanted to pursue a life in coaching. Maggie blazed her way into our lives in the Summer of 2000 where she served as a Doug Bruno Camp Coach and Dorm Mom. Her vibrant personality and caring attitude made her a favorite of campers and staff alike.

The impression she left on everyone earned her the position of the Director of Basketball Operations, a newly created “starving artist,” position at DePaul in the Fall of 2000. Maggie waited on tables at night to supplement her meager income-but she was thrilled to have the opportunity to join the coaching staff at DePaul.

Maggie quickly made an impression on the DePaul players and in the recruiting world. She worked her way up the ranks and was DePaul’s top assistant by 2004. Maggie’s role was vital in DePaul Women’s Basketball return to the NCAA Tournament-a streak that has continued for the past 13 years-a streak that is only shared by SIX other programs across this country.

Maggie was named the Head Coach at the US Military Academy at West Point just 11 days before the 2005-06 season began. Maggie would make history at West Point! Not only would her inaugural season as Head Coach include 20 wins and a Patriot League Championship, Maggie became the first basketball coach at West Point, male (this includes Bob Knight and Mike Krzyzewski) or female, to ever lead their Army team to the NCAA Tournament! This shining moment was capped off when the cadets carried a triumphant Maggie off the court. Not only had Maggie impacted her team members, she rallied the whole Academy to support her young women.

Maggie also made history when she and her brother Jamie, the Head Men’s Basketball Coach at the University of Pittsburgh, became the first brother-sister tandem to lead Division 1 teams into the NCAA Tournament in the same year. Maggie’s star shown brighter than ever!

Tragically, two days after the 2006 Women’s Final Four in Boston, Maggie passed away from complications from a heart arrhythmia. She was only 28 years old. We remember her commitment to excellence in everything she did with this award. She is also remembered every year at several basketball tournaments around the country named in her honor. The Women’s Basketball Coaches Association annually honors the best first year coach in the country with the Maggie Dixon Rookie Coach of the Year Award.

Kate No Retreat No Surrender Award 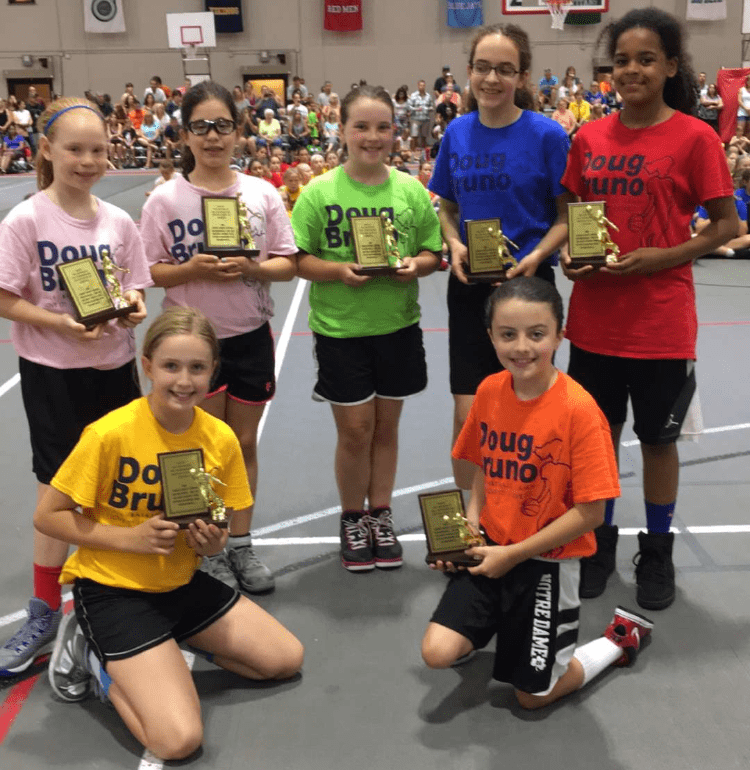 “Kate-No Retreat No Surrender Award” is an award given in memory of the late, Kathleen Meyers Grabermann. One of the first Doug Bruno campers in 1979, Kathleen was a 1981 graduate of Niles North High School. She was a three-sport athlete who went on to earn a scholarship at Loyola University of Chicago where she played basketball, volleyball, and softball. Kathleen graduated as the most outstanding Political Science as well as Sociology student in 1985.

After Law School Kathleen returned to Chicago and took a job as an associate at the firm, Bell, Boyd & Loyd. Even as a practicing lawyer, Kathleen would come out to camp and help out in the evenings.

Kathleen met and married her husband, Rob Grabemann in 1993. Their daughter Kaily was born in the fall of 1994. A year later, after a summer cold that just wouldn’t seem to go away, Kathleen was diagnosed with Acute Lymphocytic Leukemia (ALL). Kathleen battled mightily, never making excuses, never asking why, simply determined to win her battle.

After initially responding well to treatment and going into remission, the leukemia returned. Kathleen’s only chance for a cure was a bone marrow transplant. Since Kathleen was adopted, she had no known blood relatives, so she would have to depend on the National Bone Marrow Registry.

Even though she was fighting for her life, Kathleen wanted to help others in her situation. She recognized that the outpouring of support she received was not what a typical leukemia patient experienced. With that in mind, she decided we would form a chapter of the Leukemia Research Foundation and call it “Somebody’s Hero.”

Kathleen received her bone marrow transplant in August of 1996 from a German donor. The odds were not in her favor, but after almost three weeks, it looked like she might be out of the woods.  Unfortunately, since her immune system was compromised, Kathleen came down with an infection and did not survive. Her daughter Kaily would just turn 2 years old less than 2 months later.

Throughout the entire ordeal, Kathleen kept a positive attitude and fought bravely. Like the words of the Bruce Springsteen song, No Retreat-No Surrender, she never gave up, and never gave in.  The camper that earns this award shows these same characteristics-always competing hard, never giving up or giving in, no matter what the circumstances.

Sofie “I LOVE IT” Award 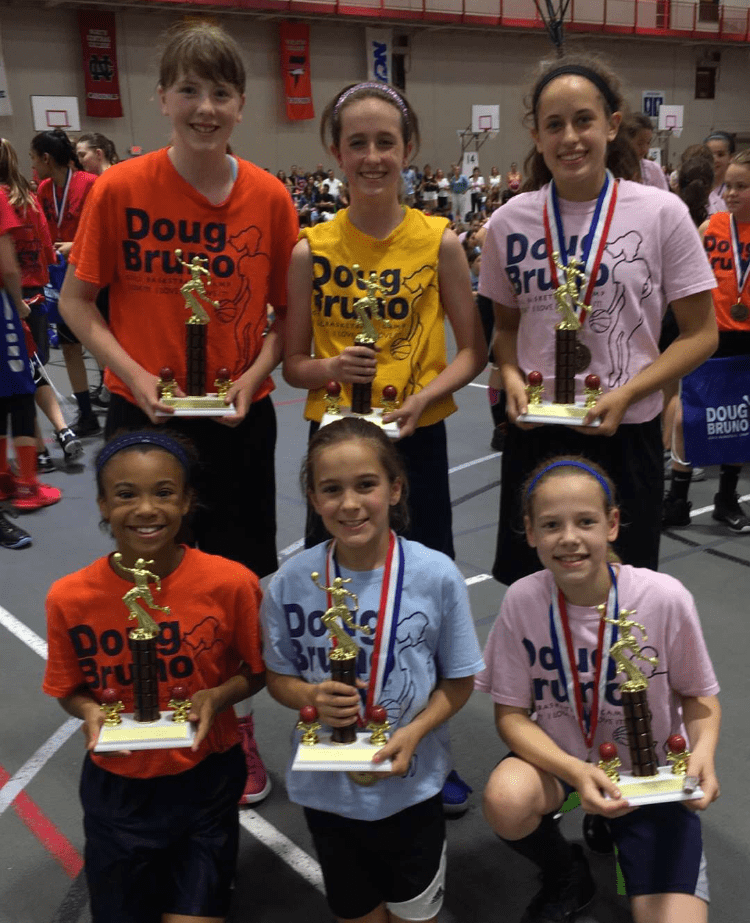 Eileen Sofie Rafa was one of the first young women to come through Doug Bruno overnight basketball camps in the early 1980’s when camp was held at George Williams College in Downers Grove. Sofie was from the south side of Chicago and attended St. Christina Grammar School and Mt. Assisi High School.

Sofie attended St. Norbert College in DePere, WI. She was a member of the St. Norbert’s Women’s Basketball Team that made a Final Four appearance in 1985.

Sofie was a hard-working, competitive athlete with a smile on her face and a passion for excellence in her heart. Sofie got along with everyone, teammates and coaches alike. Sofie was very coachable. She always had a positive attitude and was the kind of person that brought out the best in everyone.

Sofie graduated from St. Norbert’s and secured a great job in downtown Chicago. Just as she thought she had her whole future ahead of her, Sofie was diagnosed with cancer Eileen Sofie Rafa lost her battle with cancer at age 24.

The Sofie “I Love It” Memorial Award, the highest award we give at camp, is meant to recognize an athlete that demonstrates excellence in everything she does. Like Sofie, this athlete needs to be a talented basketball player. This is not a “Miss Congeniality” Award! Beyond the talent, there has to be a great work ethic, a love of the game, a positive attitude, leadership qualities and coachability. We keep Sofie’s legacy alive by recognizing the athlete that reminds us of Sofie.