The Doug Bruno Girls Basketball Camps began in their current form in 1980. Coach Bruno’s passion for basketball comes from his love of the game, his love of teaching the game and his desire to give back to all young players of the game. Through camp, he wants to spark and inspire passion in each camper at an early age. From college athletes to Olympians to the youth he works with, Coach Bruno is a true teacher of the game. 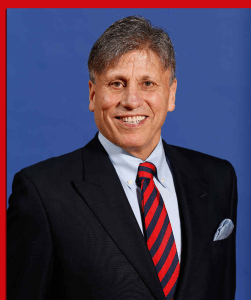 A pioneer and crusader for women’s basketball at all levels, Doug Bruno begins his 40th year of Camp Doug Bruno and 33rd season as the head of the Blue Demon program for 2018-19. His passion for basketball comes from the love of the game, the love of teaching and his desire to give back to young players by sparking passion in them at an early age.

Winning more than 825 games as a head coach, Bruno has had 23 NCAA appearances. Under his leadership, DePaul is one of only 5 schools to appear in 16 straight NCAA Tournaments. Over the years, Coach Bruno has also been honored with several recognitions and awards including induction into the Illinois Basketball Coaches Hall of Fame and the Chicagoland Sports Hall of Fame, as well as being named the 2006 and 2007 USA Basketball Developmental Coach of the Year and the 2012 London Olympic Gold Medal Assistant Coach and 2016 Rio Olympic Gold Medal Assistant Coach. To honor Coach Bruno and his commitment to DePaul University, the University named the court at McGrath-Phillips Arena the Coach Doug Bruno Court.

Beyond his role as head coach to DePaul’s Women’s team and the leader of Camp, Coach Bruno has also been an assistant coach for USA Basketball World Championships in 2010 and 2014 receiving a Gold Medal and as the head coach in 2007 of FIBA U19 (Gold Medal recipients), 2006 of FIBA U19 (Gold Medal recipients). The driver of all of these achievements is Bruno’s relentless goal of promoting and growing the game.

Because of this passion, Bruno is recognized throughout the country and the Chicagoland as a leader of women’s college basketball and women’s sports. To honor Coach Bruno and his commitment to DePaul University, the University named the court at McGrath-Phillips Arena the “Doug Bruno Court.” With the naming in November 2011, Bruno became just one of five women’s basketball coaches and three in Division I to have the court or arena named in their honor.

A true leader among his peers, Bruno completed a two-year term as President of the Women’s Basketball Coaches Association in the Summer of 2007 after being selected by his peers at the 2005 Final Four. Prior to becoming just the second male coach to lead the organization, he was the Male Coaches of Women’s Basketball Representative on the Board of Directors. Founded in 1981, the WBCA promotes women’s basketball by unifying coaches at all levels to develop a reputable identity for the sport and to foster and promote the development of the game in all of its aspects as an amateur sport for women and girls. Bruno is the chairman of the WBCA/State Farm All-American committee while he is also the East Regional representative for the NCAA Division I Tournament selection, represents District I on the WBCA Ethics Committee and is also on the Wade Trophy committee.

In addition to working with players at the youth level at his camps, Bruno also works within the highest professional levels, with USA Basketball and the WNBA. In October of 2014, Bruno was an assistant coach with the USA Women’s National Team that won the gold medal at the FIBA World Championship in Turkey. In August of 2012, Bruno was on the bench as an assistant coach when the USA Women’s National Team captured its fifth consecutive Olympic Gold. Bruno served as the assistant coach alongside Jennifer Gillom of the WNBA Minnesota Lynx and Marynell Meadors of the Atlanta Dream. Working together since 2010, the same coaching staff helped to capture gold at the FIBA World Championships in 2010. Bruno has also served as an assistant coach for USA Basketball’s recent European Exhibition Tour and was a “Court Coach” at the National Team’s Vegas Training Camp in October of 2013.

Leading up to his assignment with the Women’s National team, Bruno served as head coach of the U.S. U18 National Team and led the USA squad to the Gold Medal at the FIBA Americas U18 Championship in 2006. In the Summer of 2007, Bruno and the U.S. team headed to Bratislava, Slovakia, for the FIBA U19 Women’s World Championship. He also assists the WNBA’s Chicago Sky as a consultant to the professional franchise.

Bruno has been recognized at all levels of basketball as the only coach to be named USA Basketball’s Developmental Coach of the Year twice. He also received the Carol Eckman Award from the WBCA at the 2008 Final Four. The Eckman Award is presented annually to an active WBCA coach who exemplifies Eckman’s spirit, integrity, and character through sportsmanship, commitment to the student-athlete, honesty, ethical behavior, courage and dedication to purpose. The award is named in honor of the late Carol Eckman, the former West Chester State College coach who is considered the “Mother of the Women’s Collegiate Basketball Championship.”

In 1988 when Bruno returned to lead the women’s basketball program at his alma mater, he wanted the Blue Demons to become a factor on the national scene. 25 years later, he has helped the program achieve just that.

Bruno, who was also the Blue Demons’ head coach from 1976-78, has taken DePaul women’s basketball to new heights — during his tenure, the Blue Demons have achieved national status as one of the top women’s programs in the country.

In 2014, the Blue Demons brought national recognition to the sport of women’s basketball with a 104-100 triumph over Oklahoma in the 2014 NCAA tournament opener. It was the highest-scoring regulation game in the history of the NCAA women’s tournament.

DePaul (29-7) tied the school record for most wins in a season and set program records for games played (36), points (3,006), three-point baskets (314) and assists (705). The Blue Demons advanced to their third NCAA Sweet 16 after claiming their first BIG EAST regular-season and tournament titles. A second-round upset of No. 2 seed Duke at Cameron Indoor Stadium was Bruno’s 600th collegiate victory.

Since his return in 1988, DePaul has won 641 games, competed at 23 NCAA Tournaments, three Sweet Sixteens (2006, 2011, 2014), made four WNIT appearances, won four five tournament championships and five regular-season titles. Bruno’s squads have also spent numerous weeks in both the Associated Press and ESPN/USA Today Top 25 polls, including a two-year run from 2004-06 that featured the Blue Demons ranked from start to finish. In each of those seasons, the club was ranked as high No. 10. The Blue Demons reached a program-best No. 7 in the Feb. 21 Poll, while it finished the No. 10 in the final 2010-11 Associated Press Poll.

Individually, Bruno registered his 700th career coaching victory when the Blue Demons topped Butler February 9, 2018 on the road. Bruno is the fourth active Division I head coach to reach the 600-win plateau.

Off the Court Commitment

Off the court, success has also been bountiful. DePaul has boasted 176 student-athletes who have earned mention on conference academic honor rolls.

The WBCA began to recognize team academic success with an Academic Top 25 following the 1997-98 season. Since the poll’s inception, the Blue Demons have been ranked nine times, including a program-best No. 2 finish after the 2012-13 season. In addition to the on-court success for the 2010-11 Blue Demons’, third-highest team grade-point average had the distinction of being the only top-10 program both on the court and in the classroom. DePaul finished the 2010-11 season ranked No. 10 in both the Associated Press and USA Today/ESPN Coaches poll.

The DePaul women’s basketball team boasted a program-best 3.625 GPA in 2012-13 and was awarded the BIG EAST’s Team Academic Excellence Award for the sixth consecutive year for the highest GPA among their league counterparts.

DePaul at the NCAA Tournament

Bruno inherited a program in 1988 that played in the previous two Women’s National Invitational Tournaments and vowed to take the Blue Demons to the NCAA Tournament. After another trip to the WNIT in 1989, DePaul broke into the “Big Dance” in 1990 when the Blue Demons defeated Western Kentucky in their first NCAA Tournament contest.

The 1990 season started a string of seven trips in eight seasons to the NCAA Tournament. Three of those appearances saw the Blue Demons reach the second round, including the 1995-96 campaign when DePaul earned a seven seed, then its highest ever.

Over the last 16 seasons, Bruno has led the Blue Demons to 16 consecutive NCAA Tournament appearances and the program’s first and second Sweet Sixteen showing in 2006 and again in 2011. DePaul put together one of the top turnarounds in the program’s 30-year history with a 22-10 record in 2002-03 after posting a 15-14 mark the season before. Overall, Bruno has led the women’s basketball program to 22 post-season appearances in the last 25 years.

Players under the guidance of Bruno have claimed All-Conference mention on 55 occasions while 18 players have been named an All-American by various organizations a total of 34 times.

Prior to returning to DePaul in 1988, Bruno spent eight seasons as the associate men’s head coach at Loyola-Chicago under Gene Sullivan. During his stay, the Ramblers won 138 games and posted 17 or more wins in four campaigns, including a pair of 20-win seasons. His tenure at Loyola was highlighted by the 1984-85 squad that went 27-6 and reached the Sweet 16 of the NCAA Tournament before bowing to eventual national runner-up Georgetown. The Ramblers also captured three Midwestern Collegiate Conference titles during his time at the Chicago school.

Doug spent two seasons as the head coach and director of player personnel for the Chicago Hustle of the Women’s Basketball League (WBL). His first team (1978-79) won the league’s Midwest Division and led the WBL in 11 offensive categories as well as attendance.

Bruno began his coaching career at the high school level. He spent the 1973-74 season as an assistant varsity boys’ basketball coach at Chicago’s Francis Parker High School before becoming the head boy’s varsity coach at St. Vincent DePaul High School during the 1974-75 campaign.

Coach as a Player at DePaul

Doug became a three-year letter winner for DePaul and Hall of Fame coach Ray Meyer after playing high school basketball at Archbishop Quigley for the legendary Dick Flaiz. Bruno was a two-year starter at DePaul and led the 1971-72 squad in assists. He received his B.A. in English in 1973, and later returned to earn his M.A., also in English, in 1988.

The Bruno’s call the Rogers Park neighborhood on Chicago’s north side home.